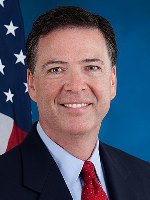 Full name: James Brien Comey Jr.
Noted For: Director of the U.S. Federal Bureau of Investigation (2013-2017). Led an investigation into Secretary of State Hillary Clinton's use of a private family e-mail server for official government communications. Stated that Clinton potentially commited felonies, but recommended that she not be prosecuted. Re-opened the investigation a week before the presidential election between Clinton and Donald Trump. Dismissed by President Trump.
Quotation: "This is not to suggest that in similar circumstances, a person who engaged in this activity would face no consequences."