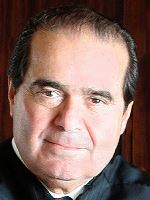 Full name: Antonin Gregory Scalia
Nickname: Nino
Noted For: U.S. D.C. Court of Appeals judge (1982-86); U.S. Supreme Court Justice (1986-2016), appointed by Reagan. Described himself as an "originalist" regarding Constitutional interpretation and dismissed using the legislative history of a statute as a valid means of interpreting it.