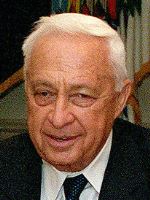 Full name: Ariel Scheinermann
Noted For: Israeli defense minister (1981-82), resigned under pressure over his responsibility for massacres in Beirut during Israel's war with Lebanon. Enacted a unilateral withdrawal of ground forces from the Gaza Strip. Prime minister (2001-06). Left the Likud party and formed the Kadima party (2005). Comatose from a stroke from 4 January 2006 until his death.