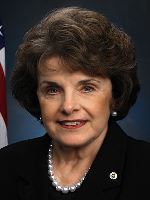 Full name: Dianne Emiel Goldman Feinstein
Noted For: mayor of San Francisco (1978-88), U.S. Senator (D-CA, 1992-). Authored the Federal Assault Weapons Ban, which prohibited the manufacture of certain semi-automatic firearms from 1994 to 2004.
Quotation: "If I could have gotten 51 votes in the Senate of the United States for an outright ban, picking up every one of them - Mr. and Mrs. America, Turn 'em all in - I would have done it."