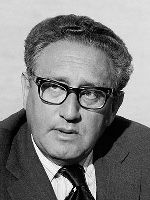 Full name: Henry Alfred Kissinger
Noted For: National Security Advisor under Nixon (1969-75), U.S. Secretary of State under Nixon and Ford 1973-77). Received the Nobel Peace Prize in 1973 and the Presidential Medal of Freedom in 1977.
Quotation: "Power is the ultimate aphrodisiac."