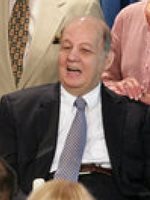 Full name: James Scott Brady
Noted For: White House press secretary under Reagan (1981). Shot and seriously wounded in Reagan's assassination attempt (30 March 1981); became an advocate of gun laws, eponymn of the Brady Law, requiring background checks and waiting periods on gun purchases. Was the official Press Secretary through the end of the Reagan administration, but in title only.