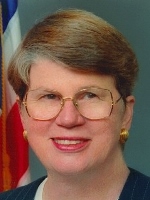 Full name: Janet Wood Reno
Noted For: U.S. Attorney General under Clinton, D (1993-2001). Authorized the federal seige and assault on the Branch Davidian compound in Waco, Texas (1993). Authorized the use of heavily armed federal agents to remove Elian Gonzalez from the home of his Miami relatives (2000).