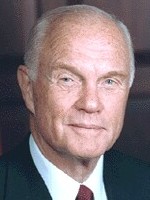 Full name: John Herschel Glenn Jr.
Noted For: One of the original seven Mercury astronauts; became the first American to orbit the Earth with his Mercury 6 flight (20 February 1962). U.S. Senator, D-OH (1975-99). Flew on the NASA space shuttle as an incumbent congressman, becoming the oldest person in space (1998).