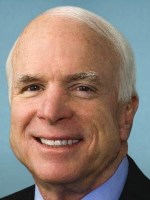 Full name: John Sidney McCain III
Noted For: U.S. representative (R-AZ, 1983-87) and senator (R-AZ, 1987-2018). Sponsored the McCain-Feingold Act, which placed limits on political campaign financing (2002). Republican nominee for President (2008). Was a prisoner of war in Vietnam after his Navy bomber was shot down over Hanoi (1967-73). After months of torture, he made an anti-American propaganda statement, which he later disavowed.
Quotation: "Every man has his breaking point. I had reached mine."