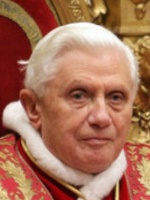 Full name: Joseph Alois Ratzinger
Noted For: Roman Catholic clergyman; cardinal of Munich and Freising (1977-82), prefect of the Congregation for the Doctrine of the Faith (1981-2005), pope (2005-13). Resigned for health reasons; was the first pope to resign since the Middle Ages.