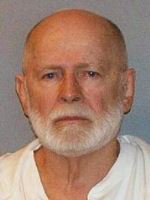 Full name: James Joseph Bulger Jr.
Noted For: Boston crime boss. Was tipped off about federal indictments against him in 1994, went into hiding, and was on the FBI's Ten Most Wanted Fugitives list until his capture in 2011. Convicted on 31 counts, including 11 murders, and sentenced to two terms of life in prison, plus five years.