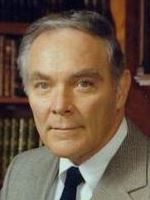 Full name: Alexander Meigs Haig Jr.
Noted For: White House chief of staff under Nixon (1973-74) after Haldeman's resignation; Supreme Allied Commander in Europe (1974-79), U.S. secretary of State under Reagan (1981-82). Directed the White House immediately after Reagan was shot in an assassination attempt (1981).
Quotation: "As of now, I am in control here, in the White House, pending return of the Vice President and in close touch with him."