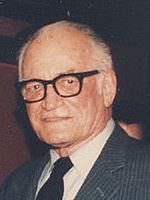 Full name: Barry Morris Goldwater Jr.
Noted For: U.S. Senator (R-AZ, 1953-65, 69-87). Republican Presidential nominee (1964). Often regarded as the ideological father of today's conservative political movement. Father of Barry M. Goldwater Jr.
Quotation: "I would remind you that extremism in the defense of liberty is no vice. And let me remind you also that moderation in the pursuit of justice is no virtue."