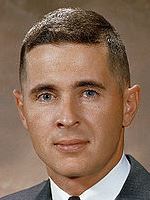 Full name: William Alison Anders
Noted For: U.S. astronaut; as lunar module pilot on the Apollo 8 mission, became one of the first three humans to leave Earth orbit and fly to the moon. Joined his crewmates Frank Borman and Jim Lovell in a Bible reading from lunar orbit on 24 December 1968. Took a famous photograph of the Earth rising over the moon.
Quotation: "We came all this way to explore the Moon, and the most important thing is that we discovered the Earth."