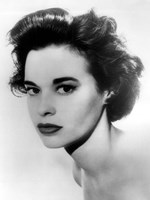 Full name: Gloria Laura Vanderbilt
Noted For: fashion designer; created a line of tight-fitting designer jeans in 1976. Inherited half of a $5 million trust fund at the age of 18 months and was the subject of a custody battle between her mother and her aunt, which the aunt won. Mother of news anchor Anderson Cooper (1967).